Trott also felt that Trump’s flailing attempts to repeal the Affordable Care Act showed Trump may be unfit for the presidency. He expressed his concern with his colleagues in the House GOP caucus.

GOP legislative caucuses across the US and in Congress once had a “Snitches End Up In Ditches” rule. Anything discussed in a closed caucus meeting was kept private in strict Skull and Bones style secrecy.

Congress members could end up with their committee assignments stripped or be subject to a well-financed primary opponent if they blabbed about anything discussed in a caucus meeting. Unfortunately, that all changed after Donald Trump became president.

Unbeknownst to Trott, House GOP leaders Kevin McCarthy and Steve Scalise and a handful of GOP Congressmen had pledged a Jonestown style blind obedience to Trump. McCarthy and Scalise would immediately brief Trump’s inner circle about discussions in the caucus meetings.

Hours after that 2017 caucus meeting, Trott received a response from another member of congress. However, it had nothing to do with the substance of Trott’s concerns.

Dave, you need to know somebody has already told the White House what you said. Be ready for a barrage of tweets.

The former Michigan foreclosure king got the message. To defy wannabe Emperor Trump is to invite his wrath. Party leaders offering blind obedience will ostracise a congressman within the party and put a premature end to a career in Republican politics. However, Trott probably would have survived. He is a major GOP donor. He also served as a finance chair for Mitt Romney’s failed 2012 presidential campaign.

As a result, Trott decided to take the coward’s way out. He decided not to seek re-election in his suburban Detroit district. He came to the misguided conclusion that running as a Trump skeptic was untenable. Thus, he joined a wave of 60 other Republicans who departed Congress in 2018 leaving only zealous Trump sycophants in the caucus.

He told the New York Times:

If I was still there and speaking out against the president, what would happen to me? Mr. Trump would have lashed out and pressured House GOP leaders to punish me. 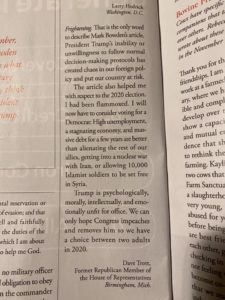 Trott also said that there is no longer a market for independence. Trott also told the New York Times:

Divergence from Trumpism will never be good enough for Democrats. Mr. Trump will target you among Republicans. Voters from the political middle will never have a chance to reward you because you would not make it through a primary. That will be ensured in part by the megaphone the president wields with the conservative news media.

Trump is emotionally, intellectually and psychologically unfit for office, and I’m sure a lot of Republicans feel the same way. But if they say that, the social media barrage will be overwhelming.

She obviously is unaware of David Trott’s history with being a mega-donor to the GOP especially in Michigan.

Maddock also made the claim that Trott had abandoned his constituents, allowing a Democrat to win his old seat.

What Maddock isn’t saying is that she and the 11th Congressional District Republican Committee got the candidate they were looking for in 2018. They endorsed and promoted an overzealous pro-Trump candidate named Lena Epstein to replace Trott. Epstein lost the election to Democrat Haley Stevens by 6 points.

Maddock’s tune will change in three months when it’s time to start raising money for the 2020 election. She’ll be kissing David Trott’s ass for money.

Also, check out these other articles about Foreclosure King David Trott:

Why Is David Trott Committing A Rogue Foreclosure Against A Former Green Beret?