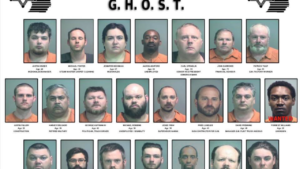 The Genesee Human Oppression Strike Team (GHOST) arrested the individuals for soliciting sex from underage children. The suspects were targeting children for sex in Genesee County.

GHOST was able to the infiltrate the dark web group. Sheriff Robert Pickell told the media:

Behind him, were the names and faces of the offenders.

The Genesee County Sheriff’s Office also accused a mother of trafficking her 6-year-old daughter. The GHOST team also made two additional arrests. The Sheriff’s office alleges one suspect is believed to have sexually assaulted a 2-year-old. Pickell also said one suspect is also accused of allegedly assaulted a 6-year-old. In two cases, Pickell said, the suspects were pimping out and having sex with their own young children.

The task force officers posed as 14-year-old boys and girls and had digital conversations with the suspects. The suspects agreed to meet at hotels and motels rooms. The Sheriff’s Department arrested the suspects when they arrived at the hotel.