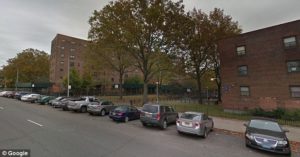 The shocking allegations surfaced on Monday. Sources claim NYCHA supervisors and subordinates would engage in wild sex parties inside city-owned properties. This included offices, the groundskeepers’ shop and empty apartments of the Throggs Neck Houses according to the New York Post.

Monique Johnson alleges employees sometimes got paid overtime while having sex. Johnson is the president of the tenants association.

There was drinking and sexual acts going on…More playing, and less working.

Some workers got so fed up with the debauchery that they secretly shot videos and photos as evidence.

Levine declined to say whether there’s a sexual harassment investigation.

The NYCHA sent the employees to other NYCHA complexes around the city.

In light of @NYCHA staffers being relocated to other facilities, concerned those tenants could be subject to the same abuses & conditions,’

The development near the Trump Golf Links includes 29 buildings with about 2,500 residents.

The sexcapades are also the latest black eye for the embattled Housing Authority.

Mayor Bill de Blasio agreed to pay as much as $2.2 billion over the next decade to settle charges that it mounted a years-long cover-up to hide its failure to conduct required lead inspections.