Is Judge Frank Caprio Of Caught In Providence Fame Bankrupting The City Of Providence? 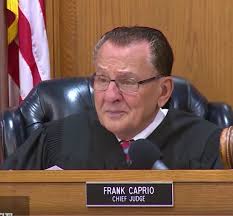 You probably know who Judge Frank Caprio is if you are on Facebook. Facebook users pass around videos of Judge Caprio wielding justice from the bench with a heart. It is no wonder people love this show. Judge Frank Caprio is what a judge should be and the type of judge America needs more of.

Matter of fact, I flip on Judge Caprio’s videos when I’m having a rough day with lawyers and clients in foreclosure. He gives hope to the people who believe the American judicial system is part of the corrupt status quo.

Caprio is a Providence, Rhode Island Chief Municipal Court judge. The Providence municipal court handles traffic and parking tickets Caprio and his associate judges answer to the Mayor and the City Council.

He is also the star of the social media show, Caught In Providence. The show is like a low budget People’s Court. It takes place in Caprio’s courtroom and uses only two cameras. Yes, people who come before Judge Caprio are real with real-life problems.

Detective Quinn acts as a Rusty The Bailiff in Caprio’s courtroom. Quinn has a reputation in Providence for being a cop’s cop. However, he comes off as a gentle giant on the show. He also has an awesome Irish wit.

After checking out the website, I discovered the show is also in TV syndication. It is aired on 100 stations across the US. Unfortunately for me, it airs at 3;30 am here in Fort Lauderdale and I’m in dreamland at that time. So, I can’t watch it. 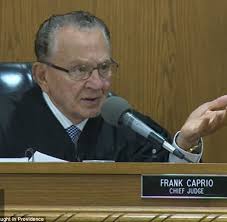 Court fines and tickets are the lifeblood of any local court in America. That’s why in most local courts in America regardless of your defenses, you will always be found guilty of a traffic violation. After all, the courts have a budget they have to meet.

Someone also has to pay for those judicial junket trips to Hawaii to ogle bikini-clad Polynesian women and young Polynesian beefcake.

I began wondering how much of a dent Judge Caprio’s kindness and sense of fairness has on the City Of Providence’s revenue stream.

If this was in the days of Buddy Cianci, Buddy’s boys would go shake down a handful of city contractors to make up the difference. However, Cianci isn’t around anymore.

Because of the show, people donate money to the court to help those in a bind. Those episodes tend to be tearjerkers.

Apparently, I’m not the only one who thought about the decrease in city revenue. Several years ago, a city tax official approached Judge Caprio about lost ticket revenue. To which Caprio shot back, “I’m not a revenue enhancement officer. I’m a judge.”

That belief is why Caught In Providence is so popular. America with all our problems right now needs an authority figure re-assuring us that everything will be fine and there is always a solution to a problem.