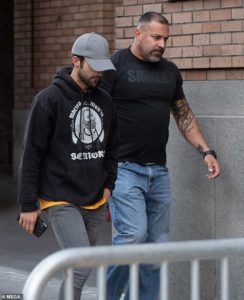 The Young and the Restless actor Max Ehrich is scared to death and in hiding. A Los Angeles real estate agent is allegedly stalking the soap star. The psycho Realtor allegedly became obsessed with him and pulled a gun on him in a fit of rage after showing him a property.

TMZ is reporting Max Ehrich looked at property in the Los Angeles area with the realtor.

The Realtor soon became infatuated with the actor. The Realtor allegedly became sexually aggressive. Ehrich rebuffed his advances. As a result, the psycho Realtor then became enraged and at some point pulled a gun on Ehrich. Although, sources told TMZ it may have only been a pellet gun.

Max Ehrich has gone into hiding and hired full-time security.

He took to social media to tell his one million followers on Instagram about the incident. The soap star told his fans that the realtor had been stalking him for a month prior to the gun incident. The actor also posted a picture showing a security guard on what appears to be a hotel bed. Ehrich stated that he’s okay but is clearly fearing for his life.

Social media is a great tool but please be careful about sharing your locations. Unfortunately, there are creepy people out there.

The 27-year-old actor was spotted Friday afternoon leaving a Los Angeles law office with a bodyguard. This is the first time he’s been seen in public since going into hiding.

Be careful out there. Having a stalker is not fun. It’s a pain in the ass and it can be very scary. I know. I had to sue a guy to get him to stop.