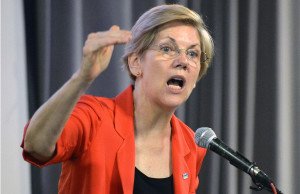 My grandfather was a retired beat cop and he used to tell me, “If people aren’t bitching, it means you’re not doing your job.”

If that is the case, then Massachusetts Senator Elizabeth Warren must be doing an awesome job for the American people because Wall Street is so upset with her and her calls for government oversight of the financial industry and for them to be broken up that some have discussed having all the major players band together and withhold money from Senate Democrats in 2016 in a symbolic protest.

The move is only symbolic because each Wall Street banks is limited to $15,000 per Senator.

Representatives from Citigroup, JPMorgan, Goldman Sachs and Bank of America, have met to discuss ways to urge Democrats, including Warren and Ohio Senator Sherrod Brown, to soften their party’s tone toward Wall Street. Bank officials told Gawker Media that the idea of withholding donations was not discussed at a meeting of the four banks in Washington oe with Senators but it has been raised in one-on-one conversations between representatives of the Wall Street banks and no agreement on coordinating any action against the Senate Democratic Caucus or the Democratic Party.

Tensions began in the aftermath of the 2008 financial crisis – the bank bailouts and the fights over financial reforms to rein in Wall Street – are still a factor in the 2016 elections.

In January, Warren infuriated Wall Street when she successfully blocked the nomination of a banker Antonio Weiss to a top post at the Treasury Department. She argued that as a regulator he would likely be too deferential to his former Wall Street colleagues.

Warren’s populism and take-no-prisoners approach has won her a strong following among liberals who raised 300,000 signatures for a petition urging her to run for President in 2016 against Hillary Clinton.

Citigroup who was bailed out by taxpayers during the 2008 financial crisis has decided to withhold donations for now to the Democratic Senatorial Campaign Committee over concerns that Senate Democratic leaders could give Warren, Brown and others who share her views more power and influence.

New reports indicate JPMorgan representatives have met Democratic Party officials to emphasize the connection between its annual contribution and the need for a friendlier attitude toward the banks. In past years, the bank has given its donation in one lump sum but this year has so far donated only a third of the amount, the source said.

Goldman-Sachs which already made its $15,000 donation for the year, took part in the Washington meeting between the four banks to talk about the anti-bank rhetoric of some Democratic lawmakers like Warren have made but the Goldman Sachs executives claim there have not had any discussions about withholding money.

Bank of America is not coordinating with other banks on when and how much to give, according to a source familiar with the bank’s thinking. It has not yet sent in its check.