The Chinese Economy Is At Risk Because Of Places Like Detroit

For those of you who missed it, Gordon Chang at Forbes wrote a great piece today. He wrote that the Chinese economy is at risk because Chinese real estate speculators are buying property like crazy in Detroit. They are also encouraging other rich Chinese to park their money in Detroit.

Chinese shoppers can’t resist a bargain. Where else can you buy a two-story home in the U.S. for $39? China Central Television, the state broadcaster, in March reported that two houses in Detroit cost the same as a pair of leather shoes. No wonder a poster on Sina Weibo, the Twitter-like service, asked, “Seven-hundred thousand people, quiet, clean air, no pollution, democracy — what are you waiting for?”

Moreover, Chinese purchasers are making bulk purchases of “inexpensive properties” — those selling for $25,000 or less — in the rings surrounding the city center.  “They’re banking on the downtown resurgence spiraling out into those rings,” explains Kelly Sweeney of Coldwell Banker Weir Manuel.  Mainland parties often buy at tax and foreclosure sales, hold their property, and patiently wait for appreciation.

Chinese Are Patient. Americans Not So Much 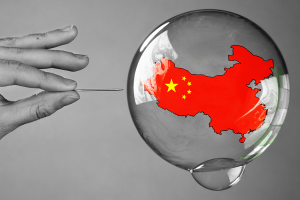 Gordon Chang has lived and worked in Hong Kong and Shanghai for over two decades. He makes an interesting observation about Chinese business strategy when it comes to Detroit. He says it’s about patience. A business concept that most Americans have long since forgotten.

He also says not to expect Chinese businessmen to be pumping millions of dollars into renovation projects anytime soon. As Chang points out:

China’s rich are investing in the Motor City like they invest in their own country. They buy multiple units at a time. In China, like here, they often keep their acquisitions vacant, treating new properties like stores of value.”

The long-term Chinese investment strategy in Detroit indicates there is more to the story.

The bigger story is the wealth being moved offshore from China. Chinese only have 13% of their wealth parked offshore compared to the global average of 20% to 30%. Yet it is the number of rich Chinese who are leaving mainland China that should be frightening Chinese leaders.

Over half of China’s millionaires have taken steps to emigrate to the West. Boston Consulting Group estimates that Chinese millionaires hold $450 billion in assets outside their country. That number is expected to double over the next three years. Yet WealthInsight believes the number to be closer to $658 billion.

One of the largest and most rapid wealth migrations of our time.

Although all this investment may be good for Detroit, it says less about Detroit’s prospects as it does about the economic outlook of China. As Chang observes, “as grim as the future is for Motown, it is evidently better than China’s, at least according to many Chinese.  They are pouring their cash into Detroit.“