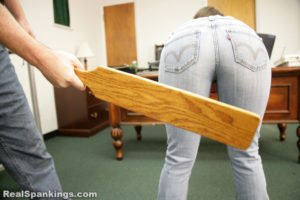 An Equifax spanking is coming! The company is expecting various forms of punishment from both the Consumer Financial Protection Bureau and the Federal Trade Commission. The spanking is from the credit reporting agency’s massive data breach that exposed the personal information of 148 million U.S. consumers to hackers last year.

The company revealed the expected sanctions in a recent filing with the Securities and Exchange Commission.

Equifax states the CFPB and FTC have both notified the company that they expect to seek injunctive relief damages in regards to the data breach.

The company added that it will cooperate with the agencies in their investigations.

The company did not provide an expected timeline for when the potential punishment will be announced, but the fact that the CFPB is seeking to levy a fine against the company for the breach represents a shift from the bureau’s recent actions in the case.

A little over a year ago, it was reported that the CFPB, under interim Director Mick Mulvaney, was not pursuing Equifax with the same vigor that the bureau likely would have under former Director Richard Cordray.

The CFPB said last year that it would begin looking into the Equifax breach. However, Reuters later reported that Mulvaney’s CFPB had pulled back from investigating the breach.

Now, it appears that the tide has turned and the CFPB supposedly planning a fine.

Equifax also stated that the New York Department of Financial Services notified the company that it is considering recommending taking legal action against it.

The FTC launched its own investigation into Equifax after the breach was first exposed. The FTC action seems to be nearing its end but those are hardly the only agencies and parties that are pursuing Equifax over the breach.

The company is also facing a number of lawsuits from cities and shareholders. There are also more than 1,000 lawsuits from consumers over the breach.

Equifax said in the SEC filing: