Actor Brad Pitt made a lot of promises to the people of Lower Ninth Ward of New Orleans after Hurricane Katrina in 2005. The hunky heartthrob promised to regenerate the area of New Orleans with new homes.

Unfortunately, the homes he built homes were built with shoddy building materials. The homes are covered in black mold.

Pitt’s charity promised to build affordable housing and encouraged through his charity, The Make It Right Foundation. The actor and local politicians encouraged people to move back to the Ninth Ward.

Brad Pitt and his then-wife, actress Angelina Jolie promised to build 150 affordable homes through the foundation. However, less than 100 homes were built. Nearly 40% of the homes built are now uninhabitable.

9th Ward residents are now aiming their wrath at Brad Pitt and his charity Make It Right. They claim that Pitt and Jolie broke their promises and left them with a bigger mess.

Residents also now refer to the actor as “Joe Black Mold” after his starring role as Death in Meet Joe Black.

Brad Pitt and Angelina Jolie were originally lauded as humanitarians who were willing to put their money where his heart was.

Yet, many of the homes are falling down thanks to shoddy building materials. Residents complain roofs are caving in and rotting wood is making the walls collapse. 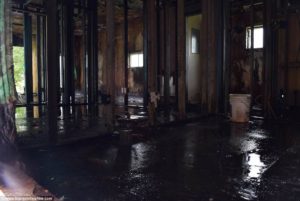 People praised Pitt for his actions after the storm and believed the program made a difference despite running massively over budget.

Make It Right said it had spent $25 million by 2015. Yet, an NGO claimed the charity had spent four times that amount.

Residents now curse Brad Pitt’s name and refer to him as “Joe Black Mold” as their homes are literally falling down around them.

Regeneration has also ground to a halt. The area looks worse than it did after the storm. Most of badly designed Make It Right homes boarded up because the new owners can’t afford the repairs.

Residents bought the homes at a discount. However, the properties are worthless because of structural flaws in the homes.

In one case, a Make It Right Home abandoned by its owners had completely rotted away because the walls and roof collapsed.