Michigan Priest Jon Wehrle is proud of his prowess as a builder. He especially proud of his $4 million masterpiece home in the rural outskirts of Lansing, Michigan.

The two-story, stone-façade house has eight bedrooms and 12 bathrooms. It also has a library and a wine cellar. Like other luxury homes, it also has an indoor swimming pool and wood-paneled elevator.

The Michigan priest also lived in the mansion. Local real estate brokers estimate the mansion was worth $4 million.

How could a priest from rural Saint Martha’s Parish who earned $42,000 a year afford this house? A house that even Pope Francis would shun.

Wehrle was charged with six counts of embezzlement.

The Diocese of Lansing may have missed several chances to stop the pilfering according to depositions and police reports.

In 2007, Wehrle was embroiled in a lawsuit with a contractor. The contractor alleged Wehre failed to pay his bill.

Wehrle stated in a deposition in the 2007 lawsuit he used church checks to pay for the home. He said he switched money from his personal bank account to the church account and paid contractors from the church account.

The home wasn’t a secret. It was too big to be a secret. A priest building a $3 million-$4 million home is fishy. 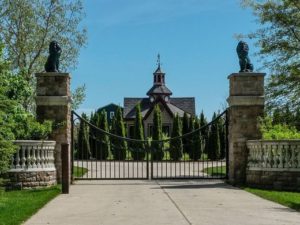 Wehrle never moved into the Saint Martha’s rectory after coming to the parish.

He said he had an agreement with the late Bishop Povish to continue living in private homes at church expense.

However, three surviving diocese bishops told police they weren’t aware of such a deal. Bishop Povish died in 2003.

Rev. Mike Murray who was Povish’s chief of staff has flatly denied such an agreement existed.

The Michigan Priest Had Control Over Accounts And Donation Box

Wehrle had sole access to Saint Martha’s finances according to police. He was the only person allowed to open the mail and handle church finances.

Korpela told police there were many red flags including the fact Father Jon does everything alone.

Audits were done whenever there was a change of leadership at a parish. However, Wehrle was the only pastor at Saint Martha during its first 29 years.

George Landolt became the chief financial officer of the diocese in 2012. One of the first things he did was hire an auditor to review spending by all of its parishes in the diocese.

The auditor, Plante Moran, visited Saint Martha and recommended it hire a bookkeeper and spread financial duties among several people. Plante Moran also recommended the parish use a software program to review spending.

However, Wehrle balked at the changes. Wehrle refused to allow anyone to see parish financial records or its general ledger.

The audit discovered Wehrle had used St. Martha funds to pay for furnishings and materials at his home. He also had written checks to himself and three family members.

In the number column of invoices, Wehrle attributed the spending for Saint Martha’s rectory and parking lot.

His mansion seemed to be in a perpetual state of improvement. Wehre spent $140,500 on the mansion in 2016 alone.

An incomplete audit of 70 boxes of seized financial records showed $4 million in expenditures stretching back to 1998. Prosecutors also say another $1 million is unaccounted for.

A stroll along the 10-acre property takes one past a four-tier fountain and a pond ringed by a stone balustrade. The property also has a barn and a Victorian-style gazebo with a cupola in a garden filled with statues.