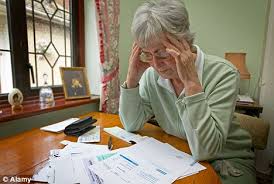 The student loan debt crisis has hit the baby boom generation. Roughly 4% of Americans between ages 65 to 74 carried federal student loan debt in 2010. This figure is up from 3% in 2004 according to a report by the Governmental Accountability Office (GAO).

Senator Bill Nelson (D-FL) was the first to recognize the problem:

Some may think of student loan debt as just a young person’s problem. Well, as it turns out, that’s increasingly not the case.

The report also stated that the total amount of the debt grew from $2.8 billion in 2005 to about $18.2 billion last year.

The GAO found 25% of loans held by people 65 to 74 and the number of these older Americans who had their Social Security benefits offset to pay student loan debt increased about 500% from 31,000 to 155,000 in the past decade.

I find it very ironic that I incurred this debt as a way to improve my life. Yet I sit here today because the debt has become my undoing,”

“Anderson amassed $64,000 in student loans as she worked toward her undergraduate and graduate degrees. She said she has worked multiple jobs to pay off credit card debt. She has also renegotiated terms of her home mortgage. Yet, she hasn’t been able to make a student loan payment in eight years. The amount she now owes has ballooned to $126,000.”

Anderson could be 81 by the time she pays off her student loans. After struggling with divorce, health problems and an underwater home mortgage, the 57-year-old anticipate the day will come when all of her Social Security benefits will be used make her student loan payments.