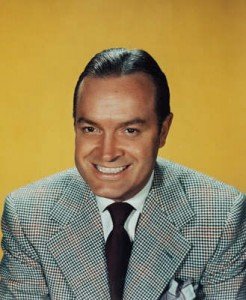 John Lautner designed the Palms Springs mansion that looks like something out of an old school James Bond flick. Lautner had originally intended for the home to resemble a volcano.

Now, if you’re under 40 years old, you’re probably wondering, “Who’s the hell is Bob Hope? Bob Hope was a movie star during your grandparents’ day. Hope was known for his comedy films and entertaining American troops overseas with the USO. He was also known for his many homes and his parade of extra-martial affairs.  He died in 2003 at 100 years old.

Bob Hope was also known for his many homes and his parade of extra-martial affairs.  He died in 2003 at 100 years old.

The modernist structure is built of concrete and glass, with an undulating copper roof that rises to an open semi-circle at its center. AOL News Reporter says, “The home was used primarily as a second residence for the Hope family and was the place where they entertained most often, inviting friends such as Tony Bennett and Glen Campbell to enjoy the views from the house.”