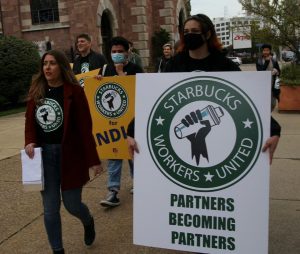 Striking employees at Starbucks called out the company yesterday for defrauding customers. The company knowingly attempted to defrauding their customers in Buffalo, New York.

Why would a major proprietor of bad coffee want to defraud their caffeine junkie customer base? Well, pure and simple infantile pettiness by CEO Howard Schultz in Seattle. Oh, and lets not forget union busting.

Starbucks is facing a growing union movement among their employees in eastern United States. The movement which started with employees wanting better working conditions at one or two store is now spreading.

Starbucks Corporate Hoped Customers Would Blame Employees For Ripping Them Off

Employees are channeling the ghosts of the Reuther brothers and Jimmy Hoffa. While elitist Starbucks executives like Schultz take lessons from notorious anti-Semite Henry Ford’s union busting playbook. Except, Starbucks is putting their own spin on Ford’s tactics. Management is attempting to manipulate their customers by pitting them against unionized workers.

Yesterday, employees went on strike at the company’s location in downtown Buffalo, NY. Starbucks Corporate shut down. However, the Schultz team left the customer mobile app for this location on. Customers placed their orders and paid through their phone.

Corporate also figured, “Why should we get our hands dirty? Let our caffeine addicted customers do our dirty work!”

Starbucks fought customers tooth and nail about giving them a refund.

This way both customers and corporate could blame employees. Unfortunately for Team Schultz, striking employees went on social media. They alerted the public that the store was closed. They also exposed the catty games Team Schultz was playing. Employees also told customers how to demand a refund from Starbucks corporate through the app.

Starbucks workers in Buffalo, NY are on strike and the company's response was to defraud their customers and let mobile orders pile up to create tension between customers who already paid and workers on strike. Follow @SBWorkersUnited to keep track of this story and support them. pic.twitter.com/XieqrYi0pn