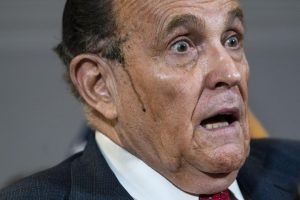 The ex-wife of Rudy Giuliani claims he wrote her a bogus check for $10,000 check. She claims he owes her money for the bounced check in a lawsuit alleging he owes her $262,000.

Judith’s lawyers have threatened Rudy Giuliani with immediate arrest or imprisonment for being in contempt of court.

Judith filed the suit as Rudy was ordered to testify before a Georgia special grand jury. The grand jury is  probing former President Donald Trump’s attempts to overturn the 2020 election results.

Court filings show Judith is demanding Rudy pay up the $262,000 he allegedly owes her immediately and with interest.

She claims Rudy owes her $140,000 for expenses related to their luxury Palm Beach condo.

The lawsuit alleges Rudy was required to pay me $200,000 regardless if the property sold or not. She claims he has only given her $60,000 of the required amount.

The former mayor is also required to pay Judith $5,000 monthly to provide her with a housekeeper or assistant.

However, she claimed Rudy has ‘made inconsistent and sporadic payments to me’ since last summer and now owes $45,000 in back pay for the help.

Is Rudy Giuliani A Deadbeat Or Just Being A Dick?

The suit also noted that their divorce agreement requires both of them to front their own country club fees and Rudy has allegedly failed to pay his half of the annual club membership dues.

Judith claims she had to pay his share of the dues. Court records shows Rudy owes her $70,000 for his half of the dues.

The lawsuit claims Rudy is in contempt of court for failing to pay his ex-wife. Therefore, he says Rudy could be jailed if the situation isn’t rectified.

Judith apparently wanted to settle the divorce on her own. She met with Rudy, he wrote the terms on a napkin. Later, the next day, they were in court settling.’

Despite his recent legal troubles, Judith is ‘confident’ that Rudy can afford to pay her the requested.

‘He owns multiple properties in New York City and Palm Beach [and it seems] he has significant earnings from his media-related contracts and deals,’ he has claimed.

The pair had a contentious divorce in April 2018 after 15 years of marriage. They sparred over their combined fortune which was an estimated $30 million.

Is Rudy A Shyster Lawyer?

During the divorce, Judith’s lawyers accused Rudy of working as trump’s lawyer free of charge in an effort to lower his income and decrease his then $42,000 monthly alimony payments.

Judith also accused Rudy of stealing her heirloom Christmas decoration collections. He accused her of swiping the TV remotes and cable box so he couldn’t watch television.

A New York judge finalized the Giuliani’s divorce in December 2019.

The agreement awarded Judith with their Hamptons house. She later sold it for $5 million.