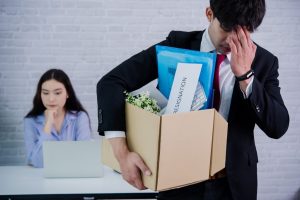 New American Funding eliminated several hundred positions. The company laid off loan officers and underwriters. In addition the company also laid off processors and training specialists. The firm had 4,800 employees in July 2021.

The California lender offers a variety of conventional and government loans. In addition to adjustable-rate and non-qualified mortgages. The company is also licensed in 49 states.

The lender has 159 active branches nationwide. The company also originated $31.8 billion in mortgages in 2021.

Employees say the company had performed multiple rounds of layoffs in the early part of 2022.

The company laid off 500 employees in February. This was ahead of the Fed’s first rate hike in March,

We were paid out on every file we did last year. Earlier this year, around March or April, they cut that back saying we couldn’t get paid out on anything unless we closed over 11 loans a month. Last year, when it was busier we were able to close 20 to 30 no problem. But with the economy as it is, it was a struggle to hit 10.”

Since the mortgage business has slowed down, we’re doing a reduction in force is what they [human resources] told me.