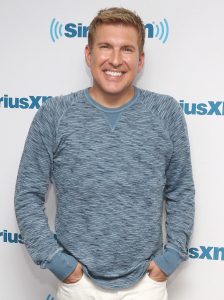 The USA Network just renewed the show for a 10th season.

After being indicted, Todd Chrisley took to Instagram to deny the claims. He implied the charges are based on the evidence presented to investigators by a disgruntled former employee.
Chrisley alleged this employee was stealing from the family and creating false documents He also alleged the employee forged their signatures and bugged their home.
In addition, Chrisley also states this is the employee’s second attempt to get the family charged. Todd Chrisley posted on his Instagram account:
I’m telling you all this now because we have nothing to hide and have done nothing to be ashamed of. Not only do we know we’ve done nothing wrong, but we’ve got a ton of hard evidence and a bunch of corroborating witnesses that prove it.

The federal indictment accused the Chrisleys of swindling $30 million from community banks from 2007 to 2012.  The TV reality couple inflated their net worth to get loans. They purposely targeting smaller banks that did less due diligence than larger ones.

Consequently, Todd Chrisley then filed for bankruptcy in 2012. Thus, he was able to erase $20 million in loan debt.

Federal Prosecutor Annalise Peters alleged the Chrisleys actively hid millions they made from the reality show. She also alleged Todd Chrisley hid  $500,000 he owed in taxes from 2009. They alleged that the couple actively evaded taxes going back to 2009.

The Feds also alleged the TV reality stars conspired with their accountant, Peter Tarantino to defraud the IRS.

Also, Check Out This Article About Todd And Julie Chrisley’s Indictment: