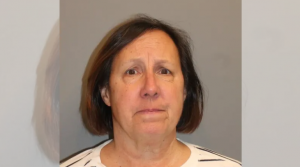 A Connecticut GOP official in Norwalk, Connecticut was arrested for murder and is being held on $1 million bond.

A dispute between a landlord and a tenant turned deadly in Connecticut. Police arrested 61-year-old Ellen Wink and charged her in the shooting death of her tenant, 54-year-old Kurt Lametta.

The Hour of Norwalk reported that she had been arrested in September after a dispute with a tenant. The tenant was not publicly identified at the time. The Norwalk police eventually identified the man killed as Kurt Lametta.

The tenant advised officers on the scene that Ellen Wink locked the tenant out of the home. She threw away all his personal belongings including clothes, jewelry and cash. Wink was located outside the home when police arrived.

Local police officers requested and warned Wink that she needed to allow him back in the house. Wink refused to permit the tenant back in the home.

Wink reportedly told the responding officer the tenant was behind on rent. She also allegedly admitted to disposing of the tenant’s possessions at the city dump.

As a result, Police arrested Wink for the criminal lockout. Police also arrested her for first-degree criminal mischief and fourth-degree larceny.

Wink’s September arrest also came less than a year after she was an unsuccessful Republican nominee for state legislature.

Wink is also the local Deputy Republican Registrar on the City Registrar of Voters and Elections Administration.