EXPOSED! Detroit Drug Trafficking Hub Operating Out Of A Former Barbershop Across The Street From Two Churches And A Playground

This one is operating out of a former barbershop at 17941 Charest in Detroit’s eastside near Conant and Nevada.

The former barbershop is located on Charest two lots south of Nevada. The building is also across the street from the Greater Apostolic Temple.

In addition, it is also a half block away from the Antioch Missionary Baptist Church and a playground. So keep your kids close when you go to church on Sunday! Drug dealers have their preying eye on them.

Church members at Greater Apostolic Temple also say they are cleaning up used syringes and needles from the sidewalk adjacent to the church on a daily basis.

17941 Charest makes for an ideal location to sell drugs. The windows on the first floor of the property have been bricked over except for several columns of glass block to let daylight in. This is an ideal spot to sell drugs because no one can see inside the building.

It is also two blocks from the Sunoco gas station on Nevada and Conant where runners can make quick deals.

According to the Wayne County Register of Deeds, 17941 Charest is owned by a 65-year-old man named James Andrews. Andrews also has barber shop license at the address.

Inside The Detroit Drug Trafficking Hub 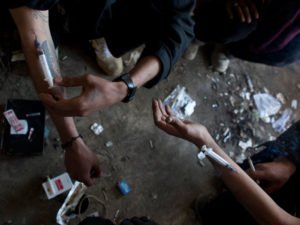 Inside the building, you’ll meet a guy with the street name, “Cuz.”

Unfortunately, our sources would not or could not tell his real name. Rumor on the street is he was just released from prison for murder.

Thus, we don’t know if he is James Andrews or what his relationship is with Andrews. That is, assuming there is one.

Cuz could simply be squatting in the property.

People in urban areas have a street name and a legal name. This is to make it harder for the police to apprehend someone.

Like a typical Detroit drug dealer, Cuz also sells everything from Boys (Heroin), Girls (Crack), Blues (Oxycodone) and everything in between out of 17941 Charest.

He’ll even let you get high and crash inside the house for a “small price” if you’re a woman.

At the motel, he’ll trade the women sex for drugs. In some cases, he will also pimp the women out to pay their debts. Word on the street is that Cuz has a thing for petite white women with blonde hair. He also gives them preferential treatment compared to other women who prostitute themselves for him in trade for drugs.

Also, Check Out These Other Stories About Detroit Drug Trafficking: