Is Detroit Drug Dealer Jajuan Hanief Marls Trying To Be A Contestant On Detroit’s Dumbest Criminals?

Marls sells everything from Boys (Heroin), Girls (Crack), Blues (Oxycodone) and everything in between out of 13953 Charest.

Marls evaded capture by the Detroit Police during two different raids on 13953 Charest in the past month. He allegedly hid waste deep in the toxic sewage that fills the basement of the drug house.

As a result, Marls now thinks he’s a Detroit version of El Chapo. However, in reality, Marls is a really dumb guy. Matter of fact, I’m talking about a guy who couldn’t win a bronze medal at the Special Olympics.

13953 Charest was raided twice in the past month because Marls’ chronic case of diarrhea of the mouth. In other words, he doesn’t know when to shut up.

Numerous sources have told us that Marls also likes to brag about his boss Derrick aka “D’s” drug operation. He has no problem detailing how it works and how much money it rakes in. That includes the plethora of addicts and recreational drug users that parade in and out of 13953 Charest.

Marls likes to take female addicts to the Woodward Inn or the LaRenaissance Motel where he trades sex for drugs. The women are there for the free drugs. Marls is there for the sex.

The women tell Marls how much they love him in order to keep getting more free heroin or crack. Unfortunately, Marls like a fool believes them. This makes Marls believe he’s some type of sexual dynamo. As result, he begins bragging about the drug operation.

Marls is either getting high on Derrick’s supply or he’s just stupid. You don’t go around running your mouth about all the money you’re making from your illegal drug operation. You also don’t run your mouth about how and where you are getting your drugs from. 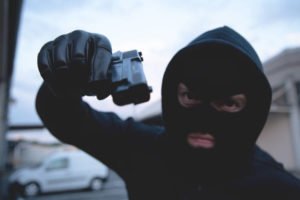 Marls and the accomplice allegedly tried to run down the victim several days later with the victim’s van. Being the idiot drug addicts they are, they didn’t happen to notice the handful of witnesses watching them.

Marls and the accomplice had a falling out about a month ago. Apparently, the accomplice was only having sex with him and was whispering, “I love you” to him to get free drugs. Marls found out she was also having sexual relations with the victim.

The jilted lover soon began threatening to kill the accomplice and other people in a jealous rage.

After the warrant was issued, Marls and his goon squad show up at the victims house. They began pounding on the front door and yelling for the victim. As a result, the victim called the Highland Park Police. Unfortunately, Marls and his pair of obese goons left the property before the police arrive.

Marls sent several texts openly bragging about going to the victim’s house and how the visit was premeditated. 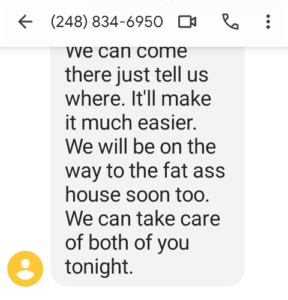 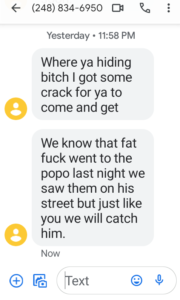 After Marls realized the victim wasn’t intimidated, he tried a new tactic. He tried to intimidate the his former lover and accomplice. As you can see below, he threatens to put “12” in her if she doesn’t bring the victim to him and put a bullet in his head. 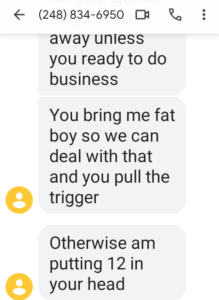 When the threats of popping 12 rounds of ammo into the woman didn’t scare her, Marls threatened to go after family in the suburbs. 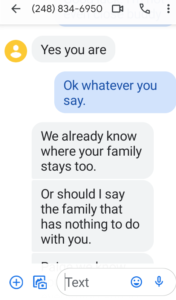 This last text message tells you Marls isn’t very bright. It also tells you he knows nothing of how things work in white suburbia.

If he would have attempted anything, he would not have made very far. Average police response time in the suburbs is 2-5 minutes not 60-90 minutes like in Detroit.

I recommend the one where John Wayne says, “Life is hard. It’s even harder when you’re stupid.”

Also, Check Out These Other Stories About Detroit Drug Trafficking: