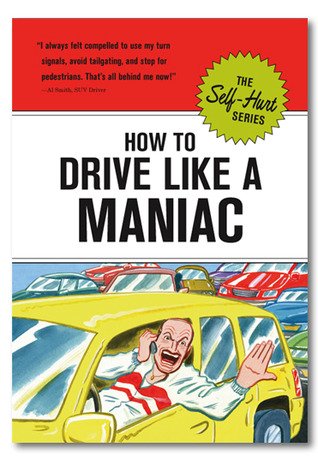 Delray Beach Mayor Shelly Petrolia’s husband, Tony Petrolia didn’t have a care in the world in the Spring of 2014.

South Florida real estate values were on the rise and wife Shelly Petrolia was just elected a Commissioner in Delray Beach. Shelly Petrolia’s political star was rising and her influence was growing.

On March 16, 2014, Tony decided to throw caution to the wind. He pressed the pedal to the metal while blasting Steppenwolf’s Born To Be Wild through the speakers of his black Lexus.

Petrolia’s adrenaline was pumping as he was driving down SE 5th Avenue at warp speed like a maniac.

Oh, no! It’s The Cops! Tony Petrolia Gets Busted

Tony Petrolia’s attempt of being profiled in the book, How To Drive Like A Maniac failed miserably.

Delray Beach Police Officer Ryan Lowry was on traffic duty that day waiting to bust speeders on SE 5th Avenue with a laser tracking gun. He clocked Petrolia driving 20 miles over the speed limit from less than 500 feet away.

As a result, Officer Lowry turned on his flashers and proceeded to stop Petrolia.

The portly Petrolia proceeds to jump out of his car. He begins lumbering toward Officer Lowry like a crazed mob boss. Lowry instructs Petrolia to get back in his car.

Petrolia gets back in his car. Officer Lowry approaches Petrolia’s Lexus. At that point, Petrolia began blubbering about being late for an appointment. He then asks Officer Lowry:

Do you know Shelly Petrolia? She’s one of the Commissioners in Delray. (2:15 in the below video)

The full unedited audio of the 10-minute traffic stop (dialogue begins at the 2:00 mark):


Tony Petrolia Gets A Break On The Ticket. Is It Because He Dropped His Wife’s Name? 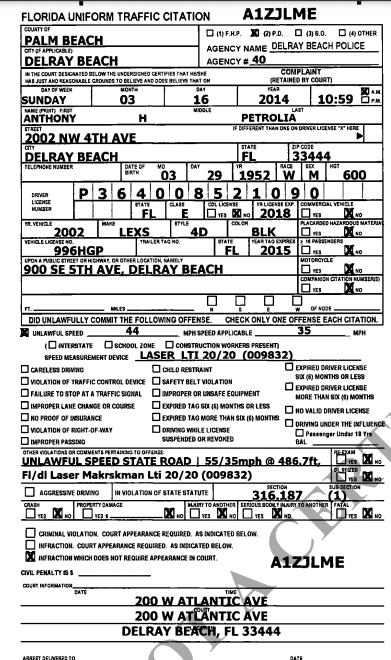 A few minutes later, Officer Lowry returns to Petrolia’s Lexus and informs him that he only wrote Petrolia up for doing 9 mph over the limit instead of 20 mph.

Did Lowry, an Iraq War veteran, feel his job was on the line if he didn’t cut Tony Petrolia a break on the ticket? That’s the million-dollar question.

After Getting A Break, Tony Petrolia Decides To Fight The Ticket

Even after catching a break on the ticket by the not-so-subtle use of his wife’s name, Petrolia decided to fight the ticket. Petrolia hired a lawyer to fight a $131.00 ticket.

Petrolia had hoped his wife’s political connections with the court would make the ticket go away.

Unfortunately, for Petrolia, it didn’t work out that way.

On 3/17/2014, Petrolia pleaded not guilty and his lawyers filed a demand for discovery. However, a month later, Petrolia changed his plea to No Contest and paid the $131.00 fine.