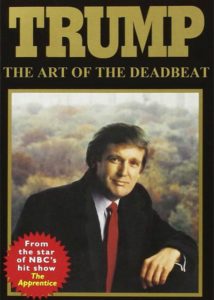 It appears Deadbeat Donald Trump and his presidential campaign owes nearly $2 million to 14 U.S. cities. The fees and late fines are for unpaid police and public safety services for his MAGA rallies. Some of the unpaid fees and penalties also go back to the 2016 election.

The Center for Public Integrity (CPI) interviewed municipal officials and examined municipal records and statements. The records show that Trump’s campaign has not paid at least 14 municipalities more than $1.82 million. Municipalities claim the unpaid money was used to cover public safety and police costs related to the president’s MAGA rallies.

Politico is reporting that Trump is refusing to pay the bill from Minneapolis. He also accused Mayor Jacob Frey of overcharging the arena in downtown Minneapolis for services.

Trump also appears to have stiffed cities like Spokane, Tucson, Burlington, Eau Claire, and Green Bay. Trump owes these cities money for services for his 2016 rallies.

Without this money, we cannot help our most vulnerable, and I guarantee we do not have enough money to prevent lives lost and homes lost.

It is the U.S. Secret Service, not the campaign, which coordinates with local law enforcement. The campaign itself does not contract with local governments for police involvement.

The complaints from local governments echo decades of accusations that Trump stiffs people. Trump has also been dogged for decades by private contractors claiming he didn’t pay them or didn’t compensate them in full for their work.

Trump has been sued at least 60 times before becoming President. He also has more than 200 liens on his properties because Trump and his companies failed to pay various businesses and scores of employees for their work according to an investigation by USA Today in 2016. Trump is accused of stiffing bartenders, painters, real estate brokers, and others.