Abena and Alex Horton are accusing a racist Florida home appraiser of purposely undervaluing their home in Jacksonville, Florida. The appraiser appraised the home in June for $330,000. The home appraised for significantly lower than other homes in the area. the homes in their neighborhood appraise for $350,000 to $550,000.

Abena Horton who is black said she sensed racism was a play.

Horton posted on Facebook that the appraiser was immediately unpleasant. He kept making one rude comment after another. He expressed an exaggerated surprise when he saw her working at her home office during the walk-through.

Abena Horton decided to conduct an experiment. She removed the photos of their multiracial family. She replaced them with paintings of her white husband and his parents, as well as holiday cards from white friends.

Albena Horton hid books by black authors like Zora Neale Hurston and Toni Morrison. She made sure Shakespeare was on display instead.

The Hortons convinced their lender to do another appraisal.

Alex Horton is white and he stayed home to greet the appraiser for the second appraisal. The experiment worked. The second appraiser appraised the value of the home was valued at $465,000. This is an increase of 41%. 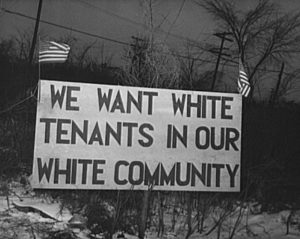 Abena Horton told ABC News that she said rolled her eyes at the original appraisal.

Why did I let myself forget that I live in America as a black person and that I need to take some extra steps to get a fair result? I know what the issue was. And I knew what we needed to do to fix it because, in the black community, it’s just common knowledge that you take your pictures down when you’re selling the house. But I didn’t think I had to worry about that with an appraisal.’

She also added that was ashamed that her son would notice that she’d hid their race.

After the second appraiser left, Abena was in tears.

To know just how much, me personally, I was devaluing the home just by sitting in it. Just by living my life. Just by paying my mortgage. Just by raising my son there. How much [the first appraiser] felt that that devalued my house, devalued the neighborhood.

In addition. this kind of discrimination is illegal. The original appraiser could find himself in the crosshairs of the state of Florida.

The Fair Housing Act of 1968 says that home appraisers cannot discriminate based on race, religion, national origin, or gender. Those who do can lose their license and even go to prison.

The Hortons said they have filed a complaint with the Department of Housing and Urban Development.

Also, Check Out These Stories About Housing And Lending Discrimination:

Bank of America Housing Discrimination Lawsuit Gets A Green Light