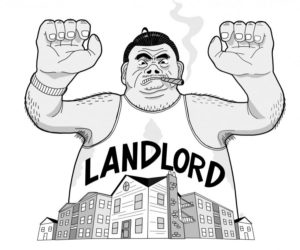 The slimy Florida landlord in South Beach is suing his tenant for alleged nonpayment. However, landlord Joshua Goldberg filed the claim as an “ejectment” rather than an eviction.

Goldberg alleges he previously canceled the rental agreement with his tenant. As a result, an ejectment would allow him to get rid of the resident.

Goldberg filed the case against Hector D. Alvarez and his father, Hector D. Alvarez Sr. citing breach of contract. He is also suing for unlawful detainer. Goldberg alleges the tenant refuses to leave the unit.

Alvarez Sr., who is 91, is the tenant. Alvarez Junior is on the lease as well and lives in the unit next door.

Junior owns nearly two-dozen units in Miami and is an experienced landlord. He told The Real Deal Miami more than a third of his tenants aren’t paying rent due to the coronavirus pandemic. He also said he has no interest in evicting them.

In April, Gov. Ron DeSantis put a freeze on evictions for renters and homeowners who can’t make their payments because of the pandemic. However, the moratorium hasn’t stopped hundreds of landlords filing eviction cases throughout the ban.

Goldberg’s lawyer Michael Perse said Goldberg is in the process of selling the unit. Perse and Goldberg say the deal could fall apart because of Alvarez’s nonpayment issues and refusal to leave.

The buyer is not going to close under these circumstances…We haven’t sued for that yet.

Alvarez says the lawsuit is simply an effort to work another angle because the eviction moratorium is still being enforced.

Alvarez’s one-year lease ended in December. It was converted to a month-to-month tenancy that started on January 1st.

Goldberg alleges he provided notice that the monthly rent would increase from $1,350.00 to $1,500 beginning in March. However, Alvarez kept paying the original rent because he wasn’t aware of the increase. Goldberg never cashed those checks and canceled the lease. He then gave Alvarez 30 days’ notice for his father to vacate.

Alvarez claims Goldberg owes him nearly $1,300 in repairs for the unit he paid for. In addition, Alvarez says Goldberg owes him a security deposit and final month’s rent that Goldberg is holding. Perse said the landlord hasn’t seen any receipts for the repairs.

Alvarez’s lawyer filed an emergency motion to quash the summons and dismiss the lawsuit. He says the suit is “in bad faith and in direct contravention” of the eviction moratorium. He also cited a May 18 request from the Eleventh Judicial Circuit to hold off on issuing summonses on residential evictions due to the pandemic.