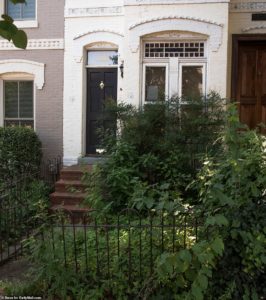 “The best known socialist in the country happens to be a millionaire with three houses. What did I miss?”

Socialist Bernie Sanders also has an estimated net worth of $2.5 million. One of Sanders’s homes is in Washington DC and serves as his home while he works in Washington.

Sanders’ property in Washington DC is his most expensive residence. The property is worth around $700,000.

So that leads to many questions about its appearance. The property is an eyesore and the Vermont Senator’s neighbors are not happy. Several neighbors have claimed they have complained to the city about the condition of the property.

Pictures of the property also back up their allegations. The building is in desperate need of a paint job and the windows need some serious repairs.

In addition, the gate and fencing are falling down. The shrubbery and grass also look like they haven’t been maintained in years. Neighbors claim they have seen everything from trash to used condoms on the front lawn.

One neighbor also told MFI-Miami, “Bernie Sanders lives in that pig sty? He better do something about it and quick. I want to sell my house and I don’t need that house bringing down my value!”

Also, Check Out These Articles About Socialist Bernie Sanders: