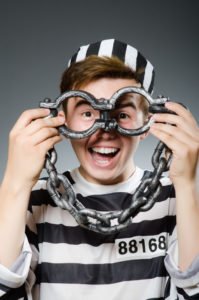 Seamans has also served time in prison for three other bank robberies,

Albany County Court Judge William Carter on robbery and grand larceny charges Tuesday in connection with the robbery of Pioneer Savings Bank in Colonie. As a result, the court ordered Seamans released on his own recognizance.

The judge issued the order after an assistant DA acknowledged Seamans qualified for release under a new state bail law.

Police and prosecutors have called for the new law to be rolled back. They claim it allows defendants charged with some serious non-violent crimes to be released.

Colonie Police said Seamans walked into the Pioneer Savings Bank Friday afternoon. He then demanded money from a teller. Seamans displayed no weapons. However, police say Seamans kept a hand inside his jacket during the robbery. Consequently, he fled in a Mercedes Benz SUV with an undisclosed amount of money.

Police arrested Seamans in DeWitt near Syracuse on Saturday. He was driving with his family to a Syracuse University basketball game. Seamans was also driving the same vehicle used in the bank robbery.

A federal judge threw Seamans in federal prison in 2011 for four years and nine months in prison. The court found him guilty of robbing NBT Bank of $7,727 in 2010. Seamans was recently released from federal prison in December 2017.

Colonie Police were hopping mad about Seaman’s release Tuesday. They issued a press release that started out:

In light of the interest in the new bail/discovery reform for 2020 – here is an early example.

It went on to report Seamans’s release without bail and his previous bank robbery convictions. It ended with this:

Happy New Year everyone! Especially happy for our most recent bank robber.

It is unclear how long Seamans will remain free without bail. Colonie Police have said they plan to ask federal prosecutors to take over the case. If they do, federal bail laws would apply, not the state’s bail laws, according to police.

Check Out These Other Stories About Other Bank Robbery Suspects:

Bank Robber Caught After Flashing The $88,000 He Stole On Facebook