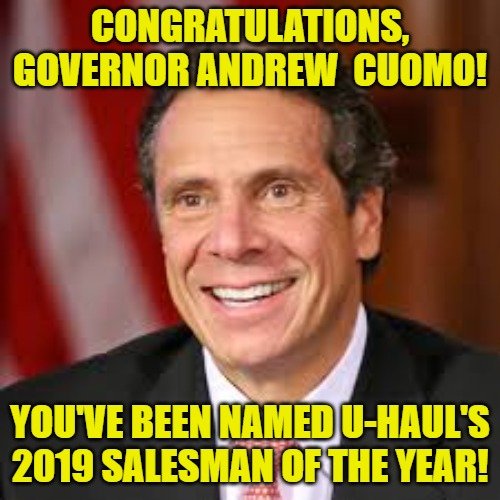 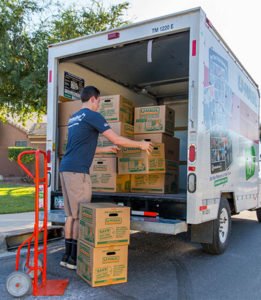 The United Census Bureau says people are fleeing New York much faster than any other state in the nation. As a result, U-Haul has named NY Governor Andrew Cuomo 2019 U-Haul Salesman of the Year.

U-Haul CEO Joe Shoen said, “Governor Cuomo has been a valuable unofficial member of the U-Haul team. I want to personally thank Andrew for all his hard work. He has helped make U-Haul the #1 moving company in North America for six years in a row!”

More than 76,000 people packed up and shipped out of New York State during 2019. They are heading to states such as Florida, Georgia and Texas. All three are the fastest-growing states in the U.S.

After New York, the states that saw most people leaving were Illinois, with 51,250 departees. West Virginia was second with 12,144 people leaving and Louisiana had 10,896 leave the state.

However, the Census Bureau found that despite the number of people leaving New York, the actual percentage decline was just 0.04 percent compared with 2018. 19,453, 561 New Yorkers still calling New York their state home.

That made the state the fourth most heavily populated in the United States. Only California, Texas and Florida have more residents. The country as a whole had 328,239,523 people living in it — an increase of 0.5 percent or 1,552,022 people.

Despite the state’s population drop, New York City is still seeing a surge in the number of homes being built. Experts at real estate website Localize.city estimate 26,000 new apartments will hit the market in 202o — 6,000 more than this year.

Also, Check Out This Article About NY Governor Andrew Cuomo Chasing People Out Of New York: