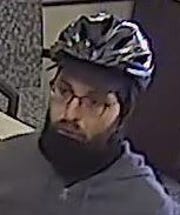 Law enforcement teams from the FBI and New York State have finally captured the mysteriously brazen Hasidic bank robber. Yosef Ziegler robbed four banks in Rockland, Dutchess and Bergen counties of $233,000 in all. He would walk into a bank and proclaim he had a bomb. Police state Zeigler also pointed to what appeared to be a weapon during several robberies.

Law enforcement captured the 29-Year-Old Ziegler at his home in Airmont right before Thanksgiving.

Ziegler had robbed four banks in the two states.  The USAO says that the largest haul was $105,000 from a bank in Fishkill, New York.

If convicted, Ziegler could face up to 25 years in federal prison.

In the Park Ridge holdup, Ziegler allegedly wore a bicycle helmet with a baseball cap underneath, a gray sweatshirt, black gloves, and glasses. The former Brooklyn resident was also carrying a blue bag that he claimed contained a bomb, authorities said.

In the Jan. 24th Pomona robbery, the robber wore a blue vest with a hood over his head. He also wore a partial ski mask, red face paint and dark clothing.

Hasidic Leader Of Talmudic Academy Gets 24 Months In Federal Prison