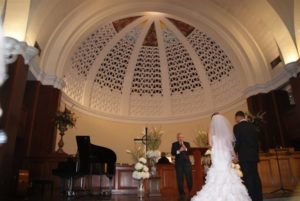 The Miami Herald reports the church is being taxed because it leased a portion of church grounds to a for-profit school and various food trucks.

The Christian Post also reports the church has used part of its campus for KeyPoint Christian Academy. KeyPoint is a for-profit K-8 institution that has about 178 students and 45 teachers, since 2008. Additionally, the church rents out space to food trucks.

As a result, First Presbyterian Church is fighting the tax bill. Attorneys for the church argue that the operation of the for-profit school “is motivated by the Church’s sincere religious beliefs.”

A complaint filed on behalf of the church states:

The Defendants have acted in an arbitrary, capricious and discriminatory manner and thereby denied the Church equal protection under the law.

Franklin Zemel, a partner at the law office of Saul Ewing Arnstein & Lehr, does not think the tax entails religious discrimination. The firm represents dozens of churches, synagogues, and mosques around the country. Zemel said:

What’s happening to this church is the ultimate nightmare scenario. I don’t see this as religious discrimination. I don’t see anything that suggests the county is acting in a mean or arbitrary way. To me, it sounds like you’ve got a church that is leasing out a school, they’re making money and not paying what they owe.