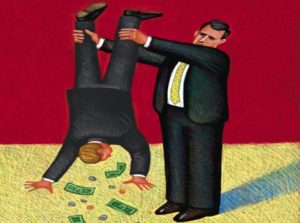 It seems as if embattled Wells Fargo Bank never learns. The embattled bank expects to refund some customers for monthly account service fees due to “confusion” over how to qualify to have the fees waived.

The bank hasn’t disclosed how many customers might be affected by the issue. They also have not disclosed how much money will be refunded. However, the company mentioned the potential refunds to rebuild customer trust. Wells Fargo has been beset by a series of embarrassing and costly scandals.

Representative Katie Porter (D-CA) publicly shared a letter to Wells Fargo CEO Charles Scharf. She asked the company to share the extent of the service fee problem. Porter says the bank may have collected hundreds of millions of dollars in service fees on its Everyday Checking accounts.

Porter referred to an earlier Capitol Forum article that reported refunds may be owed to millions of customers.

In a tweet, Porter also said she’d reached out to federal bank watchdogs.

Wells Fargo customers with this account can avoid the $10 monthly service fee. They must maintain a $1,500 minimum daily balance. They also have to maintain a direct deposit of $500 or more and make 10 or more debit card transactions.

But the bank said in its latest quarterly report that there may have been “confusion by some customers regarding the transactions that counted toward the waiver.”

Embattled Wells Fargo Bank Has A History Of Scandal

Embattled Wells Fargo has suffered from numerous gaffes in the past few years. In 2016, the bank paid hundreds of millions of dollars to settle its phony account sales tactic scandal. That scandal showed the bank opened more than 2 million accounts without customer authorization.

The bank called rebuilding trust after the scandals a “priority” in the recent SEC filing. The company’s board has also been reviewing sales practices. A third-party consulting firm reviewed years of retail banking accounts to look for any issues.

Wells Fargo said in a statement:

To the extent issues are identified, we will continue to assess any customer harm and provide remediation as appropriate. This effort is to identify other instances in which customers may have experienced harm is ongoing. It is possible that we may identify other areas of potential concern.

Also, Check Out These Articles About Wells Fargo:

Catty Wells Fargo Retaliation Against Critics Has A Long History