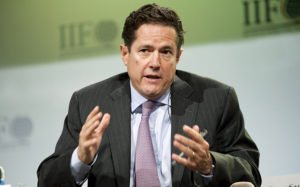 Staley told Bloomberg TV that buyers of leveraged loans are shunning transactions that aren’t structured properly. Banks globally have been left holding parts of loans that funded at least seven private-equity deals. Barclays was a lead underwriter on four of them.

If you have a deal that’s not structured properly the market can be pretty punishing at the bottom end.

The industry has surged in an era of rock-bottom interest rates. Staley and Barclays targeted and profited heavily from doing business in this area. Yet, it is beginning to show some signs of stress as investors have lost their appetite for corporate debt. Investors fear an economic slowdown and that has prompted warnings from regulators.

It’s a market that you have to have to keep your eyes open to. You can still get the strong deals done. We’re very comfortable with our portfolio. But a couple of idiosyncratic deals have opened people’s eyes that it’s not a free ride right now.

Invoice processing company OSG Billing Services and kitchen-cabinet maker ACProducts were underwritten before a sell-off in the market last year. Barclays is still holding nearly half the paper.

Barclays PLC Isn’t The Only One Getting Battered By Corporate Debt. Check Out These Articles From Bloomberg:

Read More: A $40 Billion Pile of Leveraged Loans Is Battered by Big Losses