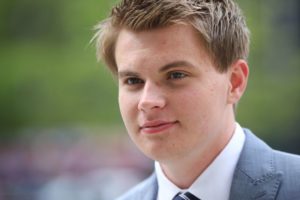 The founder of Students For Trump has pleaded guilty to fraud after pretending to be an attorney. He and an accomplice providing unlicensed legal advice to scam people out of $46,000.

John Lambert, 23, of Knoxville, Tennessee enter the plea admitting to wire fraud conspiracy in a Manhattan federal court on Wednesday.

In court, Lambert said he acted with an unidentified accomplice to create a fake website and dole out legal advice, the New York Daily News reported.

Lambert admitted in court that they presented themselves as qualified lawyers providing legal services.

Judge Valerie Caproni asked Lambert in court: ‘Are you an attorney?’ 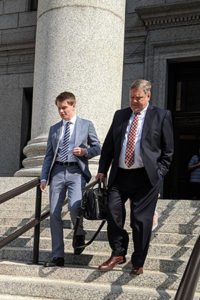 However, that didn’t stop Lambert from posing as a fictional lawyer named Eric Pope. Lambert disguising as Pope claimed to be a graduate of New York University Law School.

John Lambert represented himself to clients as a prominent New York attorney with a law degree from an elite law school. But Lambert’s de facto career was one of a grifter. He had never been to law school and certainly wasn’t an attorney. Today, Lambert admitted to his crimes and faces time in prison for his misdeeds.

Prosecutors also said Lambert pretended to have 15 years of experience in corporate and patent law and had earned a finance degree from the University of Pennsylvania.

Lambert said he carried out the scam between 2016 and 2018 while he was living in North Carolina.

John Lambert gained notoriety in 2015 for founding Students For Trump before the 2016 presidential election. He founded the group with Campbell University classmate Ryan Fournier.

The founders of Students For Trump frequently appeared on television and gave interviews in between their studies. They also ran the Students For Trump Twitter account. They used the account to share images of women in swimwear and the two young men at political events.

Students For Trump claims Lambert left the group after President Donald Trump was elected President. The group also noted it has distanced itself from Lambert following his arrest in April.

Lambert’s plea deal states he will not appeal any sentence of 21 months or less behind bars.

Also, Check Out These Articles About Trump’s Entourage Of Crazies

Is The Trump University Scam Like Herpes For Trump?