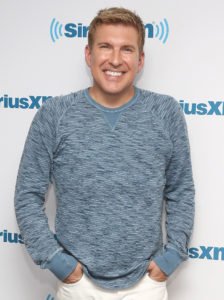 TV reality stars Todd and Julie Chrisley are facing prison time according to CNN. Federal prosecutors slapped them with a 12-count indictment on Tuesday. Federal prosecutors allege the Chrisleys committed bank fraud and wire fraud conspiracy.
The married couple star in the USA Network reality series “Chrisley Knows Best.”
The show follows their family’s over-the-top lifestyle and activities in a basically staged “reality” show. Todd Chrisley has the on-camera persona that is a cross between the late Paul Lynde and Ray Gillette from the TV show Archer.
The show has aired on the USA Network since 2014 for a total of seven seasons. A spin-off, “Growing up Chrisley,” which focuses on children Chase and Savannah, premiered in April. However, it now appears both shows have been axed due to the criminal charges.
Todd Chrisley took to Instagram to deny the claims. He implies the charges are based on the evidence presented to investigators by a disgruntled former employee.
Chrisley alleged this employee was stealing from the family and creating false documents He also alleges the employee forged their signatures and bugged their home.
Chrisley also states this is the employee’s second attempt to get the family charged. Todd Chrisley posted on his Instagram account:
I’m telling you all this now because we have nothing to hide and have done nothing to be ashamed of. Not only do we know we’ve done nothing wrong, but we’ve got a ton of hard evidence and a bunch of corroborating witnesses that prove it. 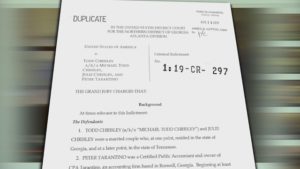 Federal prosecutors are painting a much different and darker version of the alleged crimes by the TV reality stars. It is more severe. In addition to tax evasion, the government alleges that the Chrisleys engaged in bank and wire fraud. The Chrisleys’ accountant, Peter Tarantino, has also been indicted on tax-related offenses.
U.S. Attorney Byung J. “BJay” Pak states that as early as 2007 through approximately 2012 committed mortgage fraud on numerous occasions. Todd and Julie Chrisley allegedly provided banks with false information and fabricated bank statements when they applied for and receiving millions of dollars in loans.

In 2014, the Chrisleys allegedly used fabricated bank statements and a fabricated credit report to obtain a lease for a home in California.

However, Todd and Julie Chrisley allegedly did not timely file income tax returns for 2013 through 2016 tax years. Nor did they timely pay federal income taxes for any of those years.

Instead, the Chrisleys and Tarantino allegedly took steps to obstruct IRS collection efforts. They hid income and lied to third parties about their tax returns. They and Tarantino also lied to FBI and IRS-CI Special Agents.

Also, other stories about the secrets of other TV reality stars: