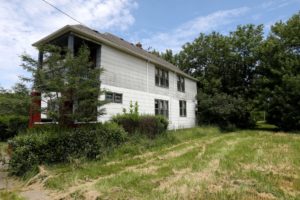 Everyone thought Detroit hoarder Sally Honeycheck was happy and content living in her family home she shared with her sister for 7 decades.  That was until she stopped answering her phone. So her cousin, Linda Kajma went looking for her during Thanksgiving weekend last year.

Detroit Police Spokesperson Sgt. Nicole Kirkwood told the Detroit Free Press that police made two well-checks on Honeycheck that day but could not break in because it was against protocol:

We just can’t break into a person’s house. Police can only enter under exigent circumstances. Those circumstances include evidence of a crime or fatal accident. Someone’s life must be in danger or jeopardy for police to break in.

The Detroit Police told Linda Kajma to file a Missing Persons Report and to check local hospitals. A few days later, Kajma discovered Sally Honeycheck had called 911 on November 10th because her sister had Lorraine had a stroke. After seeing the conditions inside the house took both sisters to Detroit Receiving Hospital. However, Sally Honeycheck checked herself out the next day. That was the last anyone saw of Sally Honeycheck. 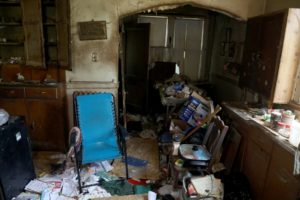 The week after Thanksgiving, Linda Kajma had enough with the run around from the Detroit Police. As a result, she forced her way into the house. She discovered that her cousin had been secretly leading a hellish existence. The living room consumed by filth, rats, feces, and mountains of clutter.

Kajma walked into the kitchen and found the horrifying remains of a person sitting in a lawn chair. The skull contained hair. Leg foot bones protruded from a blue pantsuit.

Kajma soon realized the horrifying figure in the chair was her cousin. The Wayne County Coroner later noted that Honeycheck’s remains had been eaten by her Rottweiler named Jack and the countless rats who also resided in the house.

The Detroit hoarder was an avid Avon makeup collector. She did her hair weekly and dressed impeccably for church functions.

However, the Detroit hoarder died alone in the filth of her kitchen under a picture of the Last Supper.

In the next room was Honeycheck’s deceased Rotweiller. “Jack” was another victim of the house that had no heat. The bedroom had rat-chewed mattresses and squid-like fungi growing out of the walls.