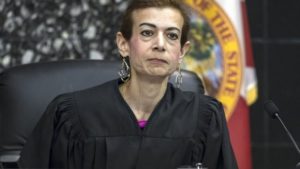 Sasser saw the Florida foreclosure activists as nothing more than a marketing tool for shady lawyers. Shady lawyers who exploited the fears of homeowners into giving them their last hard-earned dime. It turned out, Sasser was right.

Disgraced attorney Carol Asbury was Sasser’s biggest critic. Asbury and her minions to accused Sasser of everything being incompetent to being in the pockets of the banking industry. Ironically, it was soon discovered Asbury was operating a $3 million mortgage fraud scheme. She pleaded guilty in 2012 and went to federal prison.

Florida Foreclosure Activists Had It Wrong About Judge Sasser

The problem with the activist crowd is that they felt everyone deserved a free house. As a result, activists got pissed off and began acting like spoiled children when they didn’t get it.

MFI-Miami had at least two dozen cases in front of Judge Sasser. I can say she was fair. She was tough and she didn’t tolerate bullshit but she was fair. Homeowners willing to negotiate deals with their lenders got to stay in their home. Those who demanded a free house lost usually lost.

Meenu Sasser came to America from India not knowing a word of English.

Sasser received her law degree from the University of Pennsylvania Law School. She landed her a job in 1995 with Gunster. Gunster is the oldest commercial law firm in Palm Beach County.

Florida Governor Charlie Crist appointed Sasser to the bench in 2009. She soon earned the nickname “The Rocket” because of how fast she tore through foreclosure cases.