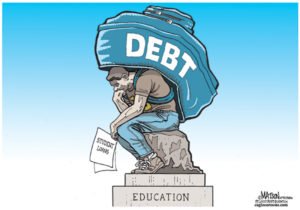 Some student-loan borrowers have fled the US as a solution to the student loan debt crisis.  A report on CNBC says millennials are fleeing the United States for better job prospects and so creditors can’t pursue them.

One borrower told CNBC he relocated to India after failing to find a well-paying job after college. He said found the cost of living much cheaper than in Colorado. He also said his student loan lender couldn’t collect from him.

One borrower who fled to Japan told CNBC she worked multiple jobs to pay off her loans but still could not afford health insurance:

I wish I could come back to America and not be scared.

There is no data surrounding the number of borrowers who fleeing the US to avoid paying off their student loans. However, there are dozens of social media sites of people who have fled the US over the student-debt crisis.

The federal government can garnish wages and tax refunds for borrowers working in the US. However, they are unable to do this for those working abroad.

The debt does not go away. However, it increasing quickly with compound interest and late fees. Borrowers who reenter the US and continue not to make payments could be sued.

Americans who stick around are struggling to pay off their loans. Student-loan debt has the highest 90-day delinquency rate of all other household debt. Some economists say nearly 40% of borrowers could default on their loans by 2023.

Solutions to student debt are likely to be at the forefront of the 2020 presidential race. Senator Elizabeth Warren, a 2020 Democratic presidential candidate, has offered a plan to eliminate student debt for 42 million Americans, funded by taxing billionaires.