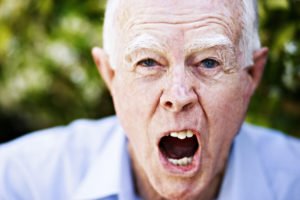 Peoria County Sheriff’s Office says an Illinois senior facing foreclosure threatened to come back to his bank with a gun. It is unknown if the man was inspired by the Roddy Piper classic, They Live.

The 67-year-old Illinois senior arrived at Princeville State Bank just before 10 am on May 22nd. He became agitated and began threatening employees.

The bank claims they had tried to negotiate a loan modification with steaming sexagenarian on his home loan. However, he never made payments. Thus, the bank began foreclosure proceedings.

Bank employees say the man came into the bank agitated and upset. The police report states that the man began threatening employees by saying he was going to return with a gun.

The bank president called police after the man left the bank. He said he did not want to press charges. However, he asked the sheriff’s office to tell the customer to never return.

A Peoria County Sheriff’s Deputy contacted the man. He explained to the disgruntled man that his behavior was inappropriate. The deputy also explained that the bank was closing the man’s accounts. The bank would also contact him in writing. Law enforcement also told the man not to return to the bank or he would be arrested. The man agreed.