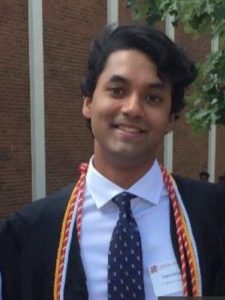 The SEC is accusing former UG frat boy Syed Arbab of allegedly running a fake hedge fund out of a frat house. SEC investigators say Arbab untruthfully portrayed himself as a University of Georgia graduate who was working on a master’s degree in business administration. He was a student at the university in Athens. However, he had not yet received his undergraduate degree.

Now the SEC pulling a Dean Wormer from Animal House and putting their foot down.

The SEC filed a six-count civil complaint in a Georgia federal court. The government claims Arbab sold investments in the hedge fund that never existed. He spent some of the funds on liquor, hotels, gambling and a Las Vegas trip.

The SEC alleges the 22-year-old received at least $269,000 from no less than eight investors. Consequently, he transferred much of the money to his personal bank account.

Connor Campbell says he has known Arbab since they went to high school in Michigan. He says that about 3 months ago, Arbab approached him to invest in a hedge fund he managed.

I really trusted him. He’s someone I never thought would do this.

Arbab sent him a portfolio and claimed he was licensed and told him the names of “smart people.”

Campbell knew some of the people who invested with Arbab’s company:

I had enough faith at that point to put some money in.

Campbell said he initially invested $5,000. However, Arbab convinced him to invest another $1,500. He said Arbab kept giving excuses when he asked for his money back.

Even though the signs of a Ponzi scheme were there, it never came across my mind that [Arbab] would do something like this.

Swift said the posts included one in which Arbab claimed he’d bought a Corvette with cash. He said it made him think Arbab must be legit.

Swift said the contract that Arbab had him sign. He was wary of the vague contract with complicated terminology. Therefore, he only invested $200.

He definitely used our relationship to his advantage. It’s clear that he had some type of insecurity that he had going on where he needed that lifestyle to attract more people to him or something like that. I feel like it’s deeper than what he was doing because he clearly did not need the money.

The SEC only has authority to file civil litigation. In Arbab’s case, the SEC seeks to freeze his assets, prevent him from destroying documents and electronic devices, pay civil penalties and return ill-gotten funds. However, Arbab could still face criminal investigation by other government entities.