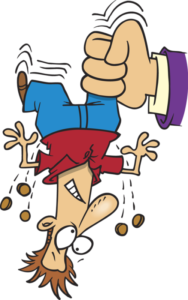 MFI-Miami has issued this student loan debt alert because your Uncle Sam is calling in your student loan debt. The Trump administration is doing everything in its power to collect from you. It is unknown if Trump plans on calling in the fat guys in tracksuits from the Bronx.

The U.S. government stepped up collections on delinquent student debt to $2.9 billion last year. The government has collected on average about $1,000 from 2.9 million former students according to the Treasury Department. The US Treasury is expected to collect $3.3 billion for the first half of the fiscal year of 2019. The federal government fiscal year runs from October 1st through September 30th.

The debt load is causing anguish that goes far beyond financial concerns. One in 15 borrowers has considered suicide due to their school loans, according to a survey of 829 people conducted last month by Student Loan Planner, a debt advisory group.

The Consumer Financial Protection Bureau said it’s received 2,475 complaints from borrowers about the government’s collection efforts since the start of 2018, including:

The federal government can also withhold state tax refunds and apply it toward repayment of a loan. Treasury is also confiscating State drivers licenses or other state-issued licenses.

The federal court can also force the employer of a borrower to withhold up to 15% of disposable pay to collect on a defaulted debt. They can do this without a court hearing.

A borrower also faces additional costs associated with collecting defaulted federal student loans. This includes the collection cost of placing a loan with a private collection agency. The collection company can also tack on additional litigation and processing costs.

Also, Check out these articles: