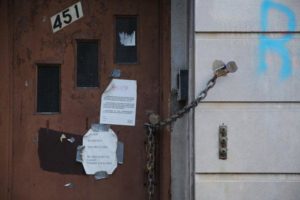 MFI-Miami has issued a deed fraud alert for Long Island. Juliette Devonish had a deed and spent tens of thousands of dollars renovating the house. However, it turns out the deed was fake.

Devonish got duped and it could have been avoided. Why? She thought she could do the real estate transaction herself. She didn’t hire an attorney and title company to do the property research.

Now Juliette Devonish is scrambling to find a place to live after she received an eviction notice.

Devonish says she signed a deed in May 2017 with Ramel Smith. Smith presented himself as the owner of the house and she gave him at least $40,000 as a down payment.

The house was a mess. I was told it was empty for eight years. I thought, okay I’ll fix it up.

Devonish also says she spent tens of thousands of dollars renovating the house. She began renovating the kitchen when she began receiving papers from banks with other people’s names on it. She also wasn’t getting mortgage or tax statements so she asked Smith.

Soon, Devonish soon learned the deed was worthless and the house was in foreclosure. Devonish acknowledges her single biggest mistake was not using her own attorney and letting Smith handle all the paperwork.

What she got from Ramel Smith is a quitclaim deed. It’s sort of a non-promise or a non-guarantee of anything. Because Ramel Smith did not own the property it’s essentially a worthless document.

Durcan is fighting to keep Devonish in the house as long as possible. She recently underwent heart surgery and is having trouble finding a place for her and her granddaughter to live.