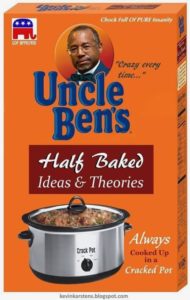 Crackpot HUD Secretary Ben Carson revealed he intends to leave his post at the end of President Trump’s first term.

Carson made the comments on the conservative news outlet Newsmax TV.

Carson said he is eyeing a position in the private sector. He told The Washington Post:

I will certainly finish out this term.

President Trump picked Carson to lead the department in 2016.

The crackpot HUD Secretary came under scrutiny for federal ethics rules last year. He appointed his son to lead a “listening tour” in Baltimore. A former HUD staffer accused Carson of excessively spending taxpayer dollars on lavish furnishings to redecorate his office.

HUD has also been criticized for halting fair housing and discrimination rules.

Carson also came under fire last year for saying he believes there is a nefarious plot by socialist perverts to destroy President Trump.

The Crackpot HUD Secretary Has Had It With Political Drama

It seems all the drama has Carson reconsidering his foray into public office.

There are more complexities here than in brain surgery.

In response to a request for comment, a HUD spokesperson shared the following statement from Carson:

President Trump hired me to do a job as the Secretary of Housing and Urban Development, and we are making tremendous progress ensuring our most vulnerable citizens are empowered with a path to self-sufficiency. I always stand ready to serve this great President and the United States of America.