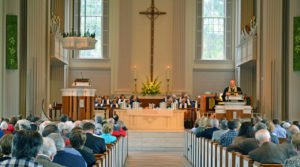 A trusted Pennsylvania church administrator and his wife are accused of stealing around $1.2 million from the church. The Pennsylvania couple used the cash on Disney vacations, sporting events, and restaurants, officials said.

David Reiter had allegedly been stealing the funds from the Westminster Presbyterian Church in Upper St. Clair for nearly 17 years.

As a result, Gilchrist confronted Reiter. Reiter then told Gilchrist he needed to resign because he did some “bad things.”

Reiter later admitted to taking an additional $100,000 from the Early Childhood Education Programs. The programs are separate entities located in the basement of the church.

Investigators later determined Reiter stole closer to $1,227,423. Reiter transferred funds from the church’s bank account into his personal one.

The Pennsylvania Couple Is Caught Pilfering The Poor Box

David Reiter was charged with 10 counts on Tuesday including theft, forgery and receiving stolen property.

Connie Reiter faces two counts of receiving stolen property. Prosecutors say she was a willing participant in the scheme by taking part in more than $900,00 of that theft.

Connie Reiter posted $5,000 bail. Yet, David Reiter remained in Allegheny County jail as of Thursday afternoon. David Reiter needs to post bail in the amount of $50,000.

The couple faces a preliminary hearing on Feb. 28th.

The Westminster Presbyterian Church did not immediately respond. However, the church did respond to the Pittsburgh Post-Gazette.

They also called David Reiter “a widely trusted, active member of the church.”