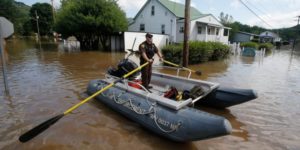 Obese racist Pamela Taylor is going to jail for ripping off FEMA. The former West Virginia non-profit director became famous in 2016 after she lost her job after she called Michelle Obama an “ape in heels”

Taylor falsely claimed her home was damaged after deadly June 2016 flooding hit West Virginia. She also later applied for FEMA benefits. The obese racist claimed she was also forced to stay in a rental unit.

Taylor goes back in front of the court on May 30th to find out her sentence.

Taylor was the head of the Clay County Development Corporation. She was fired in 2016 after Donald Trump won the presidential election for writing on Facebook:

It will be refreshing to have a classy, beautiful, dignified first lady back in the White House. I’m tired of seeing an ape in heels.

As a result of the posting, Clay Mayor Beverly Whaling responded to the post by saying:

Just made my day, Pam.

He was also forced to resign amid the backlash for supporting the racist comments of an obese racist.