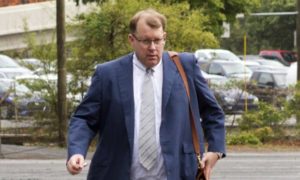 The former LandCastle Title CEO was found guilty of embezzling more than $25 million from his former companies in October.

The court ordered Hardwick to serve 15 years in prison after convicting him on 21 counts of wire fraud.

The Hardwick scandal first exploded back in 2014. Hardwick’s former partners with the law firm sued him for allegedly embezzling $30 million from the firm and the firm’s subsidiary, LandCastle Title.

The allegations against Hardwick first surfaced when Fidelity National Financial bailed out LandCastle. Fidelity acquired a 70% ownership of the title company in the bailout.

Fidelity eventually acquired the rest of the company.

Hardwick’s partners claimed that Hardwick was using the money to fund a lavish lifestyle and to cover millions in gambling debts.

The Government’s Case Against The Former LandCastle Title CEO

Hardwick sold off a part of an earlier firm in 2007. As a result, he pocketed approximately $11.8 million from the deal. However, that money quickly disappeared.

Hardwick quickly squandered that money. However, and by the end of 2010 was broke and deeply in debt.

The U.S. Attorney’s Office claimed that Hardwick’s “legitimate” income could not keep pace with his lavish lifestyle.

Between January 2011 and August 2014, Hardwick conspired with Maurya to embezzle more than $26 million to finance his extravagant lifestyle.

Court documents indicate more than $19 million of that was stolen from attorney trust accounts. Hardwick used the cash for gambling, private jets, and more than 50 different social companions.

The duo conspired to cover-up the fraud and made numerous false statements to Hardwick’s law partners.

Hardwick And Maurya Go to Prison

The government charged the duo with conspiracy, wire fraud, and bank fraud. The government also charged Hardwick with making false statements to a federally insured financial institution and charged Maurya with mail fraud.

Maurya pleaded guilty to conspiracy in May 2017. The former CFO agreed to help prosecutors in their case against Hardwick.

Upon his release from prison, Hardwick will be required to serve six years on supervised release.