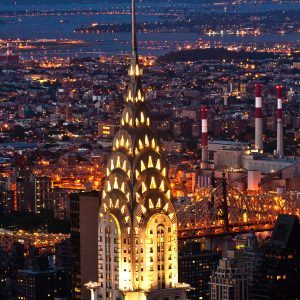 The iconic Chrysler Building in mid-town Manhattan is on the market. The Dubai sovereign wealth fund Abu Dhabi Investment Council is selling its 90% ownership in the 77-story stainless steel skyscraper. Tishman Speyer also owns a 10% stake in the building. It is unknown what Tishman plans to do about their minority stake in the building.

It’s exciting. I’m getting inquiries from all over the world.

Tishman acquired the property in 1997. The real estate company immediately commenced with a $100 million renovation to the 1.26 million square foot building. Tishman later reduced its holding. The sovereign wealth fund paid $800 million on eve of the 2008 financial crisis.

The New Owners Of The Chrysler Building Face Unique Challenges

Buildings in Midtown average about 50 years old. As result, this gives the 90-year-old art deco skyscraper a unique selling point. It stands out and is widely popular in mid-town Manhattan.

However, many of the store-fronts in mid-town are empty due to being hard hit by e-commerce. The new Hudson Yards district on the far West Side is attracting major corporations and creating competition. Thus, this is raising concerns about Midtown’s appeal.

The decision to sell a property is driven by numerous factors. One of which is unsatisfactory performance. After all, this is business and owners want a return on their investment. This also means the building needs to make money and the Chrysler Building is no different. It needs long term tenants and it needs to fill its street-level storefronts.