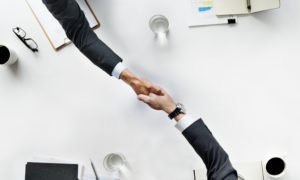 Large regional bank BB&T Bank buys SunTrust Bank. They plan to combine in a roughly $66 billion all-stock merger. This is easily the largest bank merger since the 2008 financial crisis. The merged entity will become the sixth largest bank in the U.S. with around $442 billion in assets, $301 billion in loans and $324 billion in deposits.

SunTrust’s and BB&T’s customers aren’t the only people who will be affected by this merger. Greg McBride, a chief financial analyst at personal-finance website Bankrate:

This deal’s going to open the floodgates to a number of more bank acquisitions and a renewed wave of consolidation.

A number of factors are driving the wave of mergers the banking industry. Regulatory requirements introduced after the financial crisis has driven up the cost of business. Bank mergers are one way to reduce those costs.

McBride generally broke bank mergers down into two categories: There are mergers where the two companies don’t cover the same geographical area, and then there are the mergers where they do. It’s the latter category where customers will be most impacted, he said.

SunTrust customers stand to benefit the most. BB&T had one of the highest-rated mobile banking apps in the industry before the deal,

For BB&T and SunTrust’s existing customers, the merger will mean that they will have access to a wider branch and ATM network overall. At the same time, there’s a very strong chance that their local branch will close.

A merger can also cause any number of basic banking services to become more complicated in the short-term. Routing and account numbers can change, which can complicate direct deposits and automatic bill payments. Credit-card holders may need to visit a different website to pay their monthly bills. In addition, back-office systems such as customer support will likely change.