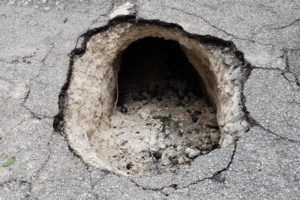 Would be South Florida bank robbers thought life was like the movies. They thought they could tunnel their way in through a basement of a Chase Bank. Unfortunately, the tunnel leading toward the bank from a wooded area was discovered in Pembroke Pines, Florida. The FBI and Broward County Sheriff’s Department is investigating.

A public works crew responded to what appeared to be a sinkhole near the Chase branch. When they looked into the hole, they noticed a power cord running into nearby woods.

Police and FBI agents responded and found the entrance to a tunnel about 50 yards long leading right up to the bank. Law enforcement found a winch, a wagon, and a small generator near the hole.

Leverock estimated that the hole was about a foot or two below ground and between two and three feet in diameter. He also called it very claustrophobic.

We don’t know who is behind this at this time. They could have been here a week ago, last night. We don’t know at this time but it is an extensive hole. Usually, you use equipment to do that. These people were using pickaxes and a small little wagon.

I would like to say I saw something like this in movies however this hole is so small, it’s unique.

Leverock said recent heavy rain may have contributed to the collapse of the tunnel and said whoever made it didn’t get into the bank, calling it an attempted burglary.