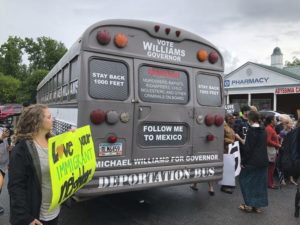 He used the bus to “round up” illegal immigrants in Georgia.  The gimmick did not go over well with Georgia voters. Williams came in fifth in the GOP primary for governor in May.

The former GOP senator allegedly made false statements and falsely reporting a crime after he filed an insurance claim.

Williams claimed $300,000 worth of stolen computer servers were stolen from his campaign office.

The indictment accuses Williams of making a false insurance claim related to the servers.

Williams’ lawyer told the newspaper that he has already worked out bond for his client.

The senator’s attorney, A.J. Richman, said Saturday that his office’s investigators are delving into the case and awaiting more details from prosecutors. He said Williams, who has declined to comment, is innocent.

“Senator Williams looks forward to his day in court, and I will vigorously defend him,” he said.

Williams also became famous when he raffled off a deadly bump stock device after it was used in a mass shooting during his gubernatorial campaign.