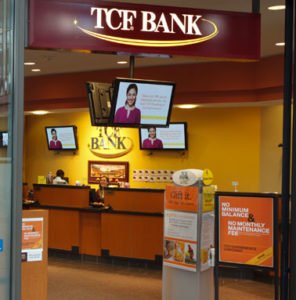 The parent company of Chemical Bank has announced that has acquired TCF Bank for $3.6 billion. The combined company will operate under the TCF Bank brand name and will make TCF the largest bank in the midwest.

The all-stock deal will make the new TCF Bank the 27th-largest in the country with $45 billion in assets. The new TCF Bank will more than 500 bank branches and nearly 10,000 employees.

The combined companies will be based in Detroit. However, it will maintain a significant operating presence in Minneapolis as well as Midland and Chicago. TCF Bank is based in Wayzata, Minn., a western suburb of Minneapolis.

We are confident that this merger will enhance our ability to deliver stronger and more sustainable growth and greater value creation than either company could achieve alone.

Dahl will remain the CEO and president of the combined banks. Chemical Bank Chairman Gary Torgow will become executive chairman of the new holding company that will own both banks. Torgow’s business partner, David Provost, will be the combined banks’ chairman.

Chemical Bank officially moved its headquarters from Midland, Michigan to downtown Detroit last year. The company began planning the construction of a 20-story, 250,000-square-foot headquarters building at Woodward Avenue and Elizabeth Street, across from Comerica Park.

Merger talks between the two banks’ executives began more than six months ago,

Chemical Bank’s Midland office will also continue to have about 500 employees, Torgow said.

The Only TCF Bank Foreclosure Defense Team That Has Brought TCF Bank To Their Knees!