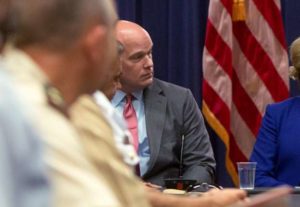 The newly crowned Acting US Attorney General Whitaker sat on the board of World Patent Marketing. He also liked sending out Trump style threatening emails to former customers who complained.

One customer complained after he spent thousands of dollars and did not receive the promised services.

Court records obtained by New Times for a 2017 feature about the fraudulent company show Whitaker touted his background as a former federal attorney and declared that filing a complaint with the Better Business Bureau and “smearing” the company online could result in “serious civil and criminal consequences.

How Much Did The Newly Crowned Acting US Attorney General Pocket From The Scam?

World Patent Marketing collected millions of dollars from starry-eyed Steve Jobs wannabes with the promise it would turn their invention into the next Frisbee or Hoola Hoop.

World Patent Marketing claimed it had an illustrious board that reviewed inventions. The board included prominent political types like Whitaker and Republican Congressman Brian Mast.

A call in Mast’s congressional office went unanswered. A Mast spokesman did speak with the Miami New Times last year. A Mast spokesman denied that the congressman was on the board and said he never accepted compensation. However, Mast did take a campaign contribution from world Patent Marketing that he later returned.

World Patent Marketing board members took cash without ever meeting with inventors. The company green-lit inventions that already existed. Therefore, patent applications were regularly denied by the US Patent Office.

None of the company’s clients made money despite the “success stories” listed on its website. World Patent Marketing took money from inventors and provided none of what was promised.

When customers complained or threatened to write negative reviews, the company’s CEO Scott Cooper unleashed wild threats and unhinged emails. Some of Cooper’s letters used Whitaker’s letterhead. While others came from Whitaker himself. Cooper and Whitaker would bully inventors into silence or accuse them of blackmail or extortion. Then threatened them with serious civil or criminal consequences.

The FTC alleged World Patent Marketing ripped off thousands of would-be inventors in the scheme. They lost as much as $400,000 apiece.

Whitaker was named Sessions’ chief of staff in September 2017.