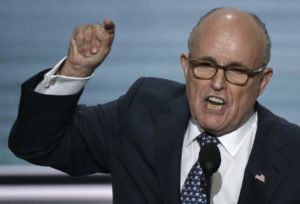 Rudy Giuliani, the former mayor of New York, claims he is too broke to pay his estranged wife alimony. This is despite making $9.5 million last year, the New York Post reports.

The symptoms of the SIDS program is front and center. First, Mr. Giuliani claims financial trouble that existed only post-commencement. His actions and his finances and his expenses don’t comport with the claim of his income diminishment.

Nathan wants Giuliani to pay for expenses for several of their shared residences. She also wants the former mayor to pay for their residences in Palm Beach and Southampton.

In addition, Nathan wants Giuliani to pay for her personal assistant and the cost of an assisted living facility for her mother. She is also seeking $63,000 a month in spousal support.

But Clair was quick to point out that the two-term mayor chose to represent Trump pro bono. He also chose to resign from his cushy gig at the law firm Greenberg Traurig.

Does Rudy Giuliani Keep Having Wardrobe Malfunctions With His Pants Zipper?

Nathan filed for divorce in April after Giuliani stepped out publicly with his mistress, Maria Rosa Ryan. He and Ryan were spotted holding hands and making googly eyes with each other in New Hampshire.

Multiple sources say the 74-year-old former US attorney cheated on Nathan with Ryan. Ryan is a hospital administrator.

This is not the first time the former mayor’s libido has destroyed his marriage. He allegedly cheated on all three of his previous wives.

Clair accused Giuliani of shelling out $286,000 in “expenses” for Ryan and her daughter over a five-month period beginning last April

Nathan also claimed the former mayor blew through $58,000 transporting Ryan and her daughter and 16 total passengers on a private plane.

Judge Katz also denied Giuliani’s request for a gag order to prevent Nathan from talking to the press about their divorce.

Katz said he would issue a ruling in the warring couple’s case and the gag order at a later date.